On the 10th January 2013, the loss adjuster informed me that the Capital Services Ltd estimate cost has been approved. He also mentioned that they should be contacting me to arrange a start date shortly.

On the 11th January 2013, I sent an email asking if I could have the schedule of works and if Capital Services Ltd was willing some private works for me.

On the 14th January 2013, Aspect Contracts Ltd contacted me in order to arrange an appointment for checking if the flat had any asbestos. Please note that this is survey was done after we asked to removed the debris from the property.

On the 17th January 2013, the asbestos survey was carried out. I also received the schedule of works from Mr Stuart W., Client Services Co-ordinator, from Capital Services Ltd. He also mentioned that the extra private works will be discussed when I meet the project manager in my flat before the works start.

On the 24th January 2013, I contacted the loss adjuster requesting an update about the works and the reasons for the forensic investigation.

On the 06th February 2013, an electrician installed a temporary electricity board.

On the 24th May 2013, the guys from the Right Units Ltd came to install the main entrance door.

On the same day I sent an email to Mr Kenny W. Project Manager from Capital Services Ltd an email stating that the Loss Adjuster had approved the floor works on the 03rd May 2013. Unfortunately it took many more emails in order for Mr Kenny W. to believe me and do the necessary jobs.

On the 06th June 2013, I sent my choice of tiles and paint colours to Mr Kenny W. from Capital Services Ltd. I specifically asked for the tiles to be installed below the top red lines as shown on the photos below: 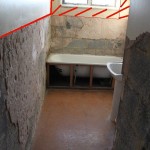 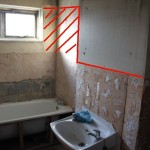