This is a seventh time we have to move to an alternative accommodation since the fire.

On the 02nd January 2014, Ms Abi D. from E.J. Taylor & Sons Ltd called me and informed me that they can install the wooden parquet floor on the 20th January 2014. It will take one week for the installation and she confirmed that by email.

Later we sent an email to Mr Adrian M. from GAB Robins asking a few questions regarding the schedule of works. 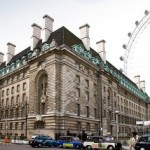 On the 03rd January 2014, Countrywide arranged for our accommodation to the Premier Inn Hotel in County Hall, Belvedere Road, London SE1 7PB.

We will stay there for two weeks from the 20th January 2014 and hopefully that will be the last time we have to move out.

On the 06th January 2014, I received a call from Mr Neil S. who is working for Burgoynes. He was instructed by the insurance to visit my property and investigate the chemicals incident on the downstairs toilet. We arranged for him to come to the property on the 20th January 2014 with a plumber in order to carry out the necessary tests.