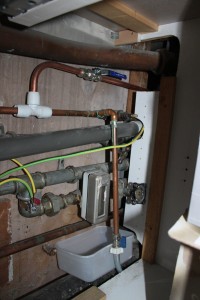 During the fire on the 05th December 2012 the fire brigade tried to use the three stop cocks under the kitchen units in their attempt to turn off the mains water as well as the hot water and heating.

The result was a broken stop cock, and two non working stop cocks.

Since the damage was created during the fire and since this stop cocks are part of the building the insurance will have to replace them.

The building insurance under the heading of Additional Covers states:

“Trace and Access – costs incurred in relation to the leaseholder’s demise in locating the source and subsequent making good following damage by escape of water – limit £5000 any one loss.”

On the 18th November 2013, Apollo engineers visited my property and changed two out of three stop cocks. This happened after 4 months of waiting and many emails to the Head of Service and Delivery in Camden Council. 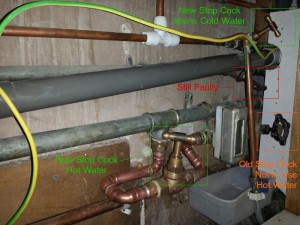 The engineers from Apollo promised to arrange another visit in order to replace the last stop cock which actually was the main problem from the beginning. We will have to wait for them to confirm another appointment hopefully soon.