On the 20th January 2014, Mr Michael C. from E.J. Taylor & Sons Ltd arrived in order to check the flat and talk about the works. He gave me his contact details and left.

Later Mr Neil S. who is working for Burgoynes arrived to the flat in order to check the toilet sink for any chemicals that might have been thrown there by the previous contractors.

At around 09:30 – 10:00am the floor specialist from  Andrew Watson & Son Ltd arrived in order to start the preparation works before the floor installation. Unfortunately that was not possible because nobody had arranged for the living room things to be removed to a storage unit.

Eventually Mr Michael C. talked with Mr Adrian M. from GAB Robins Ltd who arranged for the removal company (The Revival Company) to come and do the job. They moved the first things and then after a long 2-2.5 hours they came again for the last few things.

PROTECTION AS IT WAS BEFORE

In the meantime the contractors for the floor were instructed by Mr Michael C. to do the floor protection which they did but not at the same standards as before. 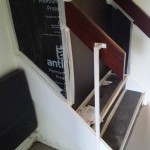 This is the way Capital Services Ltd had protected the stairs and radiators during their works on the November 2013. In that case every step was individually had been covered and the seal was much better than the current situation.

Below you can see the way the floor was protected as well as the kitchen cupboards and appliances by the previous contractor. 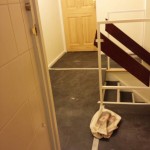 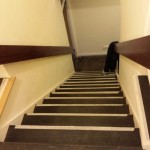 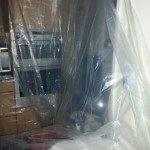 PROTECTION AS IT IS NOW 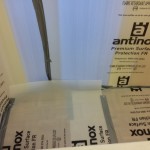 Below and on the left side you can see the photos that show you how the new contractors have tried to protect the landing and the upper wooden floor from the dust and any other works that will be carried away.

The radiators have been left uncovered. 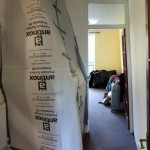 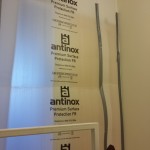 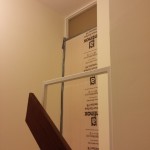 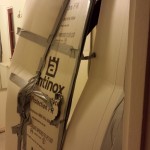 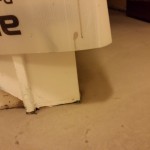 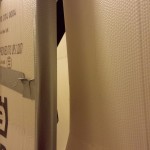 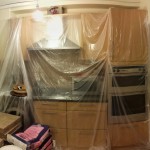 The kitchen units were not covered and I had to do that by myself. The contractors wanted to just remove the kitchen door and put one of those white sheets on the top. That in theory will stop any dust from going inside the kitchen!

On the 21st January 2014, I spoke with Mr Michael C. from E.J. Taylor & Sons Ltd regarding the protection for the floors and from the dust. He promised to take some action.

He also mentioned to me that  E.J. Taylor & Sons Ltd has not been instructed to do any other works such as painting, repairs, cleaning, etc. Those works have not been approved yet and at the same time our temporary accommodation will end around the end of the floor works.

On the 21st January 2014, I sent another email to the Loss Adjuster from GAB Robins Ltd regarding the schedule of works, expenses, quality of works, etc. This email is one of the many that I have sent since 02nd January 2014 without any response yet.