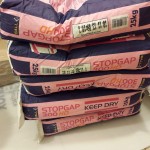 The known facts at the moment are:

2. The contractor brought to my flat 5 bags each weighting 25Kg of that adhesive.

3.  According the datasheet of that product: “A 25kg bag of STOPGAP 300 mixed with 5.5 litres of clean water will cover approximately 5.0m2 at a thickness of 3mm.”

5. The central heating inside my flat was off on 21st January 2014 due to Camden Council’s major works on the boiler room.

6. The adhesive was installed on the 21st January 2014 when the heating was off.

7. The equivalent amount of 27.5 litres of water have to go somewhere when it evaporates.

“The condensation problem is unique to your property…” and that

On the 29th January 2014, Mr Karl Helming, Technical Services Officer for F-Ball (manufacturer of the Stopgap 300 HD) informed us that:

“From your recent email we understand that 150 kg of Stopgap 300 powder water mix floor smoothing underlayment was applied and was allowed to dry with all windows closed in a cold environment and there is condensation on walls, doors and windows.  This is not unusual as when the floor smoothing underlayment is mixed with water some is chemically bound with the hydration process and the remainder evaporates; if this is in an enclosed cold environment condensation can occur.“

Below you can see a video that shows how to prepare and apply the STOPGAP 300 HD adhesive: